About 400 km to the north of our wondrous focal study site of Shark Bay lies the spectacular Ningaloo Reef and North West Cape. Some of our initial field efforts to study bottlenose and humpback dolphins up that way have involved collecting data that has already contributed to several papers (see Allen et al. 2012 and 2016, and Brown et al. 2012 and 2014 on the publications page, for example). We then obtained some funding from the Australian Marine Mammal Centre (to PI Guido Parra of Flinders Uni, and Co-Is Lars Bejder and Simon Allen) to look specifically at Australian humpback dolphin (Sousa sahulensis) ecology, and a PhD was taken on by Tim Hunt. That research is now coming to fruition, with Tim’s PhD nearing completion and his first thesis data paper hot off the (online) press. 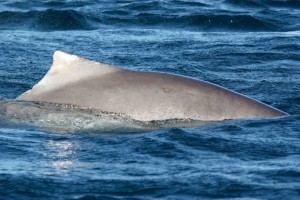 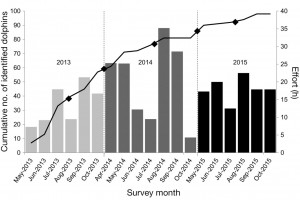 Abstract: The paucity of information on the recently described Australian humpback dolphin (Sousa sahulensis) has hindered assessment of its conservation status. Here, we applied capture-recapture models to photo-identification data collected during boat-based surveys between 2013 and 2015 to estimate the abundance, site fidelity and residence patterns of Australian humpback dolphins around the North West Cape (NWC), Western Australia (WA). Using Pollock’s Closed Robust Design, abundance estimates varied from 65 to 102 individuals, and POPAN open modelling yielded a super-population size of 129 individuals in the 130 km² study area. At approximately one humpback dolphin per km², this density is the highest recorded for this species. Temporary emigration was Markovian, suggesting seasonal movement in and out of the study area. Hierarchical clustering showed that 63% of individuals identified exhibited high levels of site fidelity. Analysis of lagged identification rates indicated dolphins use the study area regularly over time, following a movement model characterized by emigration and re-immigration. These density, site fidelity and residence patterns indicate that the NWC is an important habitat toward the south-western limit of this species’ range. Much of the NWC study area lies within a Marine Protected Area, offering a regulatory framework on which to base the management of human activities with the potential to impact this threatened species. Our methods provide a methodological framework to be used in future environmental impact assessments, and our findings represent a baseline from which to develop long-term studies to gain a more complete understanding of Australian humpback dolphin population dynamics. 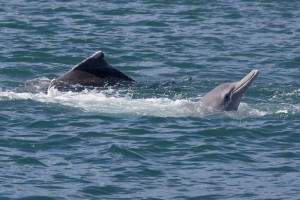 Socialising humpback dolphins. Note the scarred dorsal fin of an adult male and the long beak of the other individual – classic Australian humpback dolphin characteristics.

Funding and acknowledgements: The Australian Marine Mammal Centre (Project 12/11) and the Winifred Violet Scott Charitable Trust funded this research. We sincerely thank all ‘Team Sousa’ volunteers that assisted with data collection in the field over the 3 years of surveys. Data collection was permitted by the WA Department of Parks and Wildlife (DPaW; SF009240, SF009768, SF010289), WA Department of Agriculture and Food (U38/2013-2015) and the Australian Government Department of Defence (Harold Holt Naval Base Exmouth), with approval from Flinders University Animal Welfare Committee (E383). We would also like to thank the community and businesses of Exmouth, the staff at DPaW Exmouth, the Cape Conservation Group, and MIRG Australia for supporting the North West Cape Dolphin Research Project. We thank Ken Pollock for providing initial statistical advice on earlier versions of this manuscript.