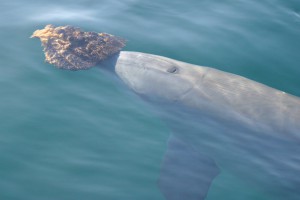 The Dolphin Innovation Project was initiated in 2007 to investigate, for the first time, tool use by dolphins in the western gulf of Shark Bay. This second base for our research allows unique comparisons to be drawn between the separate dolphin communities in the eastern and western gulfs of Shark Bay. In keeping with our name, we seek to combine both established and innovative techniques in studying some of the ocean’s most innovative inhabitants.

The Dolphin Innovation Project confirmed that social learning via cultural transmission, rather than gene variation, is a primary driver of “sponging” tool use  in dolphins. We later showed that, using sponges as foraging tools, dolphins are in fact able to gain access to sources of food that dolphins without this know-how cannot access. This foraging skill, like most in toothed whales, is past down from mother to offspring via vertical social transmission. 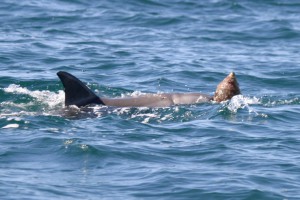 On 31st July, 2007, during our inaugural field season at this site, we captured the first photographic evidence that revealed the function of “shelling” – another remarkable foraging specialisation involving tool use. Some dolphins have developed the skills necessary to lift large trumpet or baler shells to the surface, shaking them about until the water drains out and the hapless fish hiding inside falls into their mouths. We have now tracked the spread of this behaviour and, in another first, show it can be socially learnt from their peers via horizontal or oblique social transmission.

The intriguing social politics first discovered by the Dolphin Alliance Project in the eastern gulf of Shark Bay (on that fateful day of 19th August, 1987) can be witnessed in the western gulf, where we have identified and continue to study numerous first- and second-order alliances of males. Indeed, it was four seasons in, on the 27th May 2011, that we discovered alliances of sponging males. 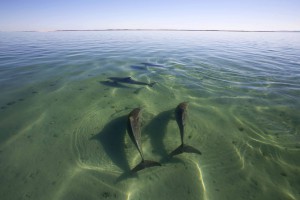 The Dolphin Innovation Project has yielded over 6,000 dolphin group surveys, formed the basis of 10 post-graduate theses, and we’ve recently had our 15th peer-reviewed journal article published based, at least in part, on data collected at this remarkable site. 2020 will bring our 14th field season, and a year in which the Dolphin Innovation Project will be  publishing further findings based on this remarkable population of non-human animals… watch this space!