The four-month field season out of Useless Loop in 2015 is (relatively speaking) ancient history… but it won’t be forgotten: hundreds of surveys were completed, thousands of photos and videos collected, association data on shellers and spongers collected, and lots of new samples obtained. It’s all in the (data)bank!

Now in the midst of data analysis, we happily remember our days in the field… the group of more than 30 males (several 2nd-order / nested alliances) competing for a female, LEI the dolphin carrying a huge sponge that nearly covered her eyes, the shovelnose ray nearly as large as our beloved little boat, seeing Oakley the female dolphin getting larger and larger and then, finally (!), with her 3-day old calf, and, of-course, living and working in one of the world’s most remote and fascinating places.

We are excited to gain further insights into the complex cooperative and foraging behaviours of Shark Bay’s bottlenose dolphins from the data collected during this and previous seasons… but, at the same time, we can’t wait to go back to the Bay in 2016! 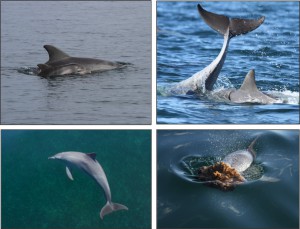