The remote and beautiful North West Cape to the north of Shark Bay appears to be important habitat for both Indo-Pacific bottlenose and Australian humpback dolphins. Don’t believe us? See the place for yourself, the images below, or the papers Allen et al. 2012, 2017, Brown et al. 2012, 2016 and Hunt et al. 2017 on the www.sharkbaydolphins.org publications page. 🙂 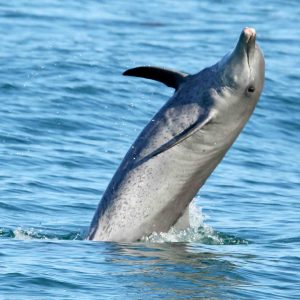 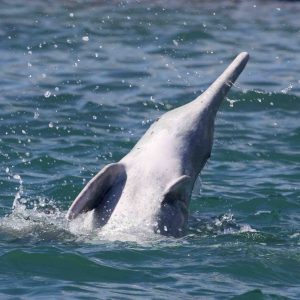 Dolphin research up North West Cape way is ongoing under the direction of our friend and collaborator Guido Parra of Flinders University, and here we are happy to promote the second of his former student Tim Hunt’s PhD data chapters – this one on Sousa social structure.

Abstract: Understanding individual interactions within a community or population provides valuable insight into its social system, ecology, and, ultimately, resilience against external stimuli. Here, we used photo-identification data, generalized affiliation indices, and social network analyses to investigate dyadic relationships, assortative interactions, and social clustering in the Australian humpback dolphin (Sousa sahulensis). Boat-based surveys were conducted between May 2013 and October 2015 around the North West Cape, Western Australia. Our results indicated a fission–fusion society, characterized by nonrandom dyadic relationships. Assortative interactions were identified both within and between sexes and were higher among members of the same sex, indicating same-sex preferred affiliations and sexual segregation. Assortative interactions by geographic locations were also identified, but with no evidence of distinct social communities or clusters or affiliations based on residency patterns. We noted high residency among females. Models of temporal patterns of association demonstrated variable levels of stability, including stable (preferred companionships) and fluid (casual acquaintances) associations. We also demonstrated some social avoidance. Our results point to greater social complexity than previously recognized for humpback dolphins and, along with knowledge of population size and habitat use, provide the necessary baseline upon which to assess the influence of increasing human activities on this endemic, Vulnerable species. 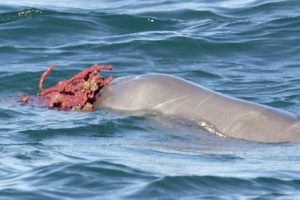 Funding and acknowledgements:This work was supported by funding from the Australian Marine Mammal Centre (Project 12/11) and the Winifred Violet Scott Charitable Trust. We sincerely thank all “Team Sousa” volunteers who assisted with data collection in the field over the 3 years of surveys. Data collection was permitted by the Western Australia Government Parks and Wildlife Service (PWS; SF009240, SF009768, SF010289), WA Government Agriculture and Food Division (U38/2013–2015), and the Australian Government Department of Defence (Harold Holt Naval Base Exmouth), with approval from Flinders University Animal Welfare Committee (E383). We also thank the community and businesses of Exmouth, the staff at PWS Exmouth, the Cape Conservation Group, and MIRG Australia for supporting the North West Cape Dolphin Research Project. We thank Fernando Diaz-Aguirre for assistance with GAI analyses, Alex Brown for his assistance with the dorsal fin analysis for sex determination, and Hal Whitehead and Mauricio Cantor for their advice on GAI and modularity interpretations.

…and watch this bloggy-space for more research outputs soon!

All images by Simon Allen and available (higher res) on request.