From small beginnings involving a series of photographs of an intriguing behaviour captured in our inaugural western gulf field season in 2007, followed by our first sighting of the now-famous “William the Concheror” with a shell on his beak in 2009, through thousands upon thousands of hours of fieldwork and subsequent data analysis… to this: 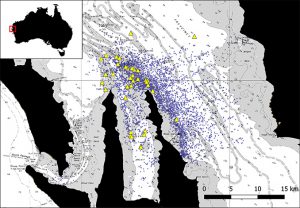 Summary: Cultural behaviour, which is transmitted among conspecifics through social learning, is found across various taxa. Vertical social transmission from parent to offspring is thought to be adaptive because of the parental generation being more skilled than maturing individuals. It is found throughout the animal kingdom, particularly in species with prolonged parental care. Social learning can also occur among members of the same generation or between older, non-parental individuals and younger generations via horizontal or oblique transmission, respectively. Extensive work on primate culture has shown that horizontal transmission of foraging behaviour is biased toward species with broad cultural repertoires and those with increased levels of social tolerance, such as great apes. Vertical social transmission has been established as the primary transmission mechanism of foraging behaviours in the Indo-Pacific bottlenose dolphins (Tursiops aduncus) population of Shark Bay, Western Australia. Here, we investigated the spread of another foraging strategy, ‘‘shelling’’, whereby some dolphins in this population feed on prey trapped inside large marine gastropod shells. Using a multi-network version of ‘‘network-based diffusion analysis’’ (NBDA), we show that shelling behaviour spreads primarily through non-vertical social transmission. By statistically accounting for both environmental and genetic influences, our findings thus represent the first evidence of non-vertical transmission of a foraging tactic in toothed whales. This research suggests there are multiple transmission pathways of foraging behaviours in dolphins, highlighting the similarities between cetaceans and great apes in the nature of the transmission of cultural behaviours.

Funding and acknowledgements: We thank Shark Bay Salt Pty Ltd and the community of Useless Loop for their logistic support, as well as all research students and volunteers who have contributed to data collection for the Dolphin Innovation Project and Shark Bay Dolphin Research (http://www.sharkbaydolphins.org). This study was supported by a Swiss National Science Foundation grant (31003A_149956), Seaworld Research & Rescue Foundation (SWRRFI) Australia, National Geographic Society, AH Schultz Stiftung, Claraz-Schenkung, Julius-Klaus Stiftung, and WV Scott Charitable Trust, all to MK.