Blurb: The beautiful and remote Shark Bay World Heritage Area (and Marine Protected Area) is home to the only known communities of tool-using dolphins on Planet Ocean. Only certain matrilines of dolphins engage in the tool-using behaviour, wearing basket sponges over the beaks/rostra as they forage. It’s thought to act as a protective ‘glove’ against sharp rocks, stingray barbs and the dorsal spines on some fish as the dolphins probe the sea floor.

There’s a general female-bias to this behaviour, with a much greater proportion of female calves adopting the behaviour her mum performs than do young males. This difference was long thought to be explained by the incompatibility of such a solitary and time-consuming behaviour with a male lifestyle – who should instead be investing time and energy into formulating alliances with other males.

Well, after a fateful survey in the western gulf of Shark Bay in May 2011, however, we discovered the existence of male alliances of sponging dolphins. About 8 years and two weeks later, here is the paper explaining this phenomenon.

Highlights: Diving into the behaviour of male dolphins that engage in tool-use for the first time and comparing them to non-tool-using males, we found that:

Title: Tool use and social homophily among male bottlenose dolphins.

Abstract: Homophilous behaviour plays a central role in the formation of human friendships. Individuals form social ties with others that show similar phenotypic traits, independently of relatedness. Evidence of such homophily can be found in bottlenose dolphins (Tursiops aduncus) in Shark Bay, Western Australia, where females that use marine sponges as foraging tools often associate with other females that use sponges. ‘Sponging’ is a socially learned, time-consuming behaviour, transmitted from mother to calf. Previous research illustrated a strong female bias in adopting this technique. The lower propensity for males to engage in sponging may be due to its incompatibility with adult male-specific behaviours, particularly the formation of multi-level alliances. However, the link between sponging and male behaviour has never been formally tested. Here, we show that male spongers associated significantly more often with other male spongers irrespective of their level of relatedness. Male spongers spent significantly more time foraging, and less time resting and travelling, than did male non-spongers. Interestingly, we found no difference in time spent socializing. Our study provides novel insights into the relationship between tool use and activity budgets of male dolphins, and indicates social homophily in the second-order alliance composition of tool-using bottlenose dolphins. 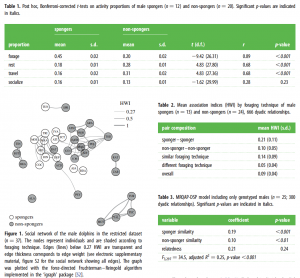 Acknowledgements: We thank Shark Bay Resources and the Useless Loop community for their generous, long-term, in-kind and logistical support. We also thank all field assistants for their help during this study.