The Dolphin Alliance Project and colleagues are pleased to announce the publication of our recent work on communication in Shark Bay’s “teams of rivals”, the male alliances… 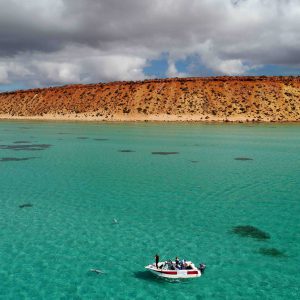 Field methods at a glance: A trio of dolphins forages in the shallows near Peron Peninsula. The research team confirms their identities with photo-identification, records their vocalisations with a four-hydrophone array and obtains aerial video with either a helikite- or a drone-mounted HD video camera (photo: Simon J Allen).

Summary: Cooperation between allied individuals and groups is ubiquitous in human societies, and vocal communication is known to play a key role in facilitating such complex human behaviours. In fact, complex communication may be a feature of the kind of social cognition required for the formation of social alliances, facilitating both partner choice and the execution of coordinated behaviours. As such, a compelling avenue for investigation is what role flexible communication systems play in the formation and maintenance of cooperative partnerships in other alliance-forming animals. Male bottlenose dolphins in some populations form complex multi-level alliances, where individuals cooperate in the pursuit and defense of an important resource: access to females. These strong relationships can last for decades and are critical to each male’s reproductive success. Convergent vocal accommodation is used to signal social proximity to a partner or social group in many taxa, and it has long been thought that allied male dolphins also converge onto a shared signal to broadcast alliance identity. Here, we combine a decade of data on social interactions with dyadic relatedness estimates to show that male dolphins that form multi-level alliances in an open social network retain individual vocal labels that are distinct from those of their allies. Our results differ from earlier reports of signature whistle convergence among males that form stable alliance pairs. Instead, they suggest that individual vocal labels play a central role in the maintenance of differentiated relationships within complex nested alliances. 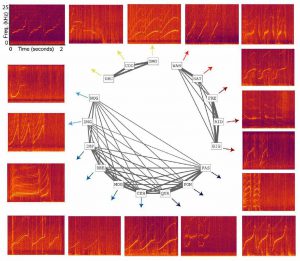 Figure 1 from the paper deftly illustrates the strength of social bonds between first- and second-order alliance partners, while the spectrograms display the whistle contours of each individual male dolphin (King et al. 2018). Note the differences between contours relative to the strength of particular social bonds.

Media: There was some very nice coverage from funders National Geographic (which you can view at: https://news.nationalgeographic.com/2018/06/dolphins-animals-courtship-friends/#), a great summary appeared in The Conversation (http://theconversation.com/male-dolphins-use-their-individual-names-to-build-a-complex-social-network-97780) and, 48 hours later, it’s pretty much everywhere! 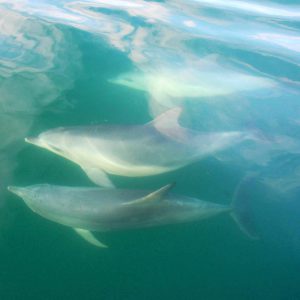 BUBBLES! Are you talkin’ to me!? (photo: Simon J Allen)
Acknowledgements: Stephanie is a Branco Weiss Fellowship—Society in Science Fellow. Stephanie, Richard and Whitney received grants from the National Geographic Society. The study was also supported by a Swiss National Science Foundation grant to Michael. Whitney was supported by a Graduate Fellowship in Anthropogeny from the University of California, San Diego. Frants was supported by the US Office of Naval Research and a fellowship from the Aarhus Institute of Advanced Studies, Aarhus University. Permits for the scientific use of animals were obtained from the Department of Biodiversity, Conservation and Attractions (DBCA), Western Australia. The University of Zurich and University of Western Australia granted animal ethics approvals. The authors thank RAC Monkey Mia Dolphin Resort, Monkey Mia Wildsights, and the DBCA’s Shark Bay Rangers, all field assistants and our human judges for their help during this study. Lastly, we grateful to three anonymous reviewers for their valuable comments on the manuscript.
Stay tuned for some more exciting findings in the next few months.