A short sail to the north-east (~700 nautical miles) of Shark Bay lies the shallow tropical seas of the Pilbara region. Other than oil and gas fields, there you’ll find a demersal trawl fishery and a faithful population of common bottlenose dolphins. Intrigued!? Learn more by clicking on (or copy-pasting into your browser) one of the links below:

Title: Preliminary estimates of the abundance and fidelity of dolphins associating with a demersal trawl fishery

Highlights: *1. An aerial survey to estimate dolphin abundance in the PTF suggests population size is smaller than expected at somewhere between 2,000 and 5,000 individuals.   *2. As expected, boat-based photo-ID and genetic sampling suggest a community of dolphins show fidelity to trawler-associated foraging over days, weeks and years.   *3. Fisheries-related mortality events are likely to have an impact on the viability of a small dolphin population, but this cannot be demonstrated without more precise estimates of mortality rates (through an observer program) and/or further estimates of abundance (to detect trends).   *4. The tendency for the dolphins to exploit the fishery as a high-risk but efficient means of procuring resources is problematic for bycatch mitigation, as foraging “traditions” tend to be handed down from one generation to the next.   *5. The data presented here do, however, provide the basis for some further assessment of the level of impact that dolphin bycatch has on the population, through either the application of Potential Biological Removal estimation (as per the US system) or completing a Population Viability Analysis.

Abstract: The incidental capture of wildlife in fishing gear presents a global conservation challenge. As a baseline to inform assessments of the impact of bycatch on bottlenose dolphins (Tursiops truncatus) interacting with an Australian trawl fishery, we conducted an aerial survey to estimate dolphin abundance across the fishery. Concurrently, we carried out boat-based dolphin photo-identification to assess short-term fidelity to foraging around trawlers, and used photographic and genetic data to infer longer-term fidelity to the fishery. We estimated abundance at ≈ 2,300 dolphins (95% CI = 1,247–4,214) over the ≈ 25,880-km2 fishery. Mark-recapture estimates yielded 226 (SE = 38.5) dolphins associating with one trawler and some individuals photographed up to seven times over 12 capture periods. Moreover, photographic and genetic re-sampling over three years confirmed that some individuals show long-term fidelity to trawler-associated foraging. Our study presents the first abundance estimate for any Australian pelagic dolphin community and documents individuals associating with trawlers over days, months and years. Without trend data or correction factors for dolphin availability, the impact of bycatch on this dolphin population’s conservation status remains unknown. These results should be taken into account by management agencies assessing the impact of fisheries-related mortality on this protected species. 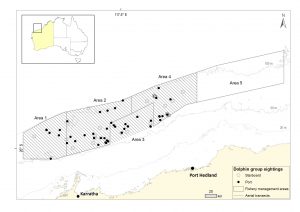 2: Boat-based photo-identification reveals a community of dolphins, like this mother and calf, that regularly follow trawlers over days and weeks, feeding on injured or discarded fish. Sharks also follow the trawlers scavenging on discards, like the sizeable whaler pictured her below the dolphins. 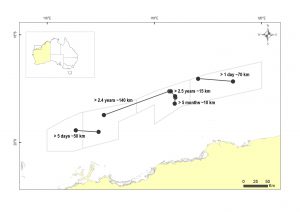 3: Locations and times between sampling events of dolphins around trawlers. Genetic re-sampling and opportunistic photo-ID confirmed that some dolphins also follow the trawlers in the Pilbara over months and years. 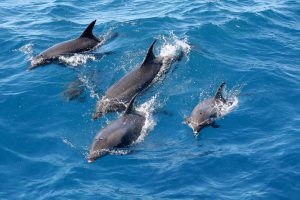 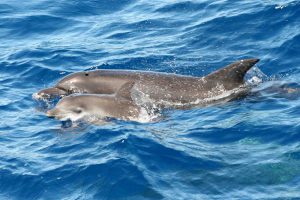 5: This newborn is likely to learn about foraging around trawlers from its mother. Unfortunately the level of risk associated with foraging in and around fishing nets is not so easily taught.

All figures are from the paper in Scientific Reports and all images are ©Simon Allen.  🙂

Funding and acknowledgements: The Australian Marine Mammal Centre was the primary funder of this research, with additional contributions from the Fisheries Research and Development Corporation, the Western Australian Department of Fisheries, and the Nickol Bay Professional Fishers Association. We thank the commercial trawl operators for in-kind support and acknowledge the logistical assistance provided by the skippers and crews of the Pilbara Fish Trawl Interim Managed Fishery. Amanda Hodgson and Maria Jedensjö were instrumental in helping design and conduct the aerial survey, respectively. The research was carried out under cetacean research permits from both the Western Australian State Government and the Australian Commonwealth Government. Dolphin tissue samples were transferred to the University of Zurich under CITES using institutional permits for scientific exchange, and the research was conducted with animal ethics committee approval from Murdoch University.