This week sees another paper out of our long-term research in the eastern and western gulfs of Shark Bay. It includes science AND pretty pictures!

Abstract: Coercive mate guarding, where males use aggression to control female movements, is a form of sexual coercion which functions to constrain female mate choice. Non-human primates, for example, herd females to keep them away from competing males, but male bottlenose dolphins (Tursiops aduncus) also herd females to keep them close to their alliance partners. Indeed, pairs and trios of male dolphins work together to sequester single estrus females and defend them from competing alliances. Yet how males facilitate such coordination remains unknown. Here, we investigate the vocal behaviour of allied male bottlenose dolphins during the herding of individual females, examining how the production of whistles and ‘pops’ (a threat vocalisation) varied with behavioural state and inter-animal distances. Allied males produced both whistles and pops significantly more often and at higher rates during social interactions, though they differed in function. Whistle rates increased significantly when new individuals joined the consorting group, consistent with previous work showing that whistles are part of a greeting sequence for this species. Whistle matching also appeared to play a role in within-alliance coordination. Pop vocalisations increased significantly when the nearest male to the female changed, likely inducing the female to remain close as the males coordinate a guard switch. Building upon prior research examining female movements in response to pops, we show that males approach the female and current guard whilst popping, leading to a guard switch. Our results provide new insights into the use of vocal signals during cooperative mate guarding between allied male dolphins. 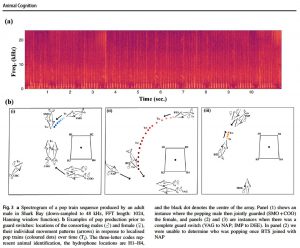 Ethics: Permits for the use of animals for scientific purposes were obtained from the Department of Biodiversity, Conservation and Attractions. The University of Zurich and University of Western Australia granted animal ethics approvals.

Acknowledgements: We thank RAC Monkey Mia, Shark Bay rangers (Department of Biodiversity, Conservation and Attractions), Shark Bay Resources, the Useless Loop community and all field assistants for help in this study. We thank David Allen of Wolf Design Limited (www.wolfd esign ltd.co.uk) for the dolphin template in Fig. 3b. Lastly, we thank two anonymous reviewers and the handling editor for their valuable comments on the manuscript.