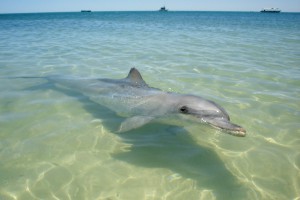 One of the most famous of the Monkey Mia beach dolphins, Nicky (pictured above in 2005) died last month. She was just shy of her 40th birthday. Only a small percentage of dolphins in Shark Bay are lucky enough to live past 40 years of age. Nicky’s mother, Holey-fin, died this same month 20 years ago.

This video clip shows Nicky interacting with her first infant, Nipper, in 1988, when Nipper was just one year old. The interactions were filmed by Scott Crane, who was helping us out that year. Although the interaction appears very “cute”, with Nipper in “baby position” and nuzzling and rubbing against her mother, it reflects an infant trying to get attention from a mother who was more focused on the free fish available at Monkey Mia.

Nicky certainly wasn’t the best mother in the bay, and her only surviving offspring (pictured with her below as a youngster in 2012), now a juvenile, remains her only opportunity to leave a lasting legacy. 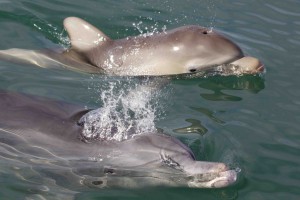 Her poor performance stands in stark contrast to other Monkey Mia females, like Puck and Surprise, who have been very successful and are now grandmothers. Nicky and Puck were born a year apart. Nicky was originally thought to be a male and was named Nick based on the large nick in her dorsal fin. Following the naming of Nick, A Midsummer Night’s Dream was the inspiration for Puck. The dolphin versions of Nick and Puck could not have had more different personalities, but in ways different from the play! Nicky was quite aggressive, while Puck (whose daughter and granddolphin are pictured below in 2012) has always had a sweet, gentle disposition. 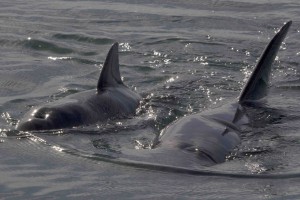