Pop goes the dolphin… at the same tempo as his ally!

Early April sees another paper out of our long-term dolphin research off Monkey Mia in the eastern gulf of Shark Bay. This research represents the fruition of an excellent Masters thesis by Bronte Moore under the primary supervision of PI Stephanie King.

Harking back to the sweet days of our Current Biology cover shot in 2018, we scored another front cover of this latest issue of the Proceedings of the Royal Society B (our 3rd for this journal): 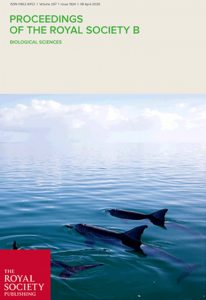 Abstract: Synchronous displays are hallmarks of many animal societies, ranging from the  pulsing flashes of fireflies, to military marching in humans. Such displays are known to facilitate mate attraction or signal relationship quality. Across many taxa, synchronous male displays appear to be driven by competition, while synchronous displays in humans are thought to be unique in that they serve a cooperative function. Indeed, it is well established that human synchrony promotes cooperative endeavours and increases success in joint action tasks. We examine another system in which synchrony is tightly linked to cooperative behaviour. Male bottlenose dolphins form long-lasting, multi-level, cooperative alliances in which they engage in coordinated efforts to coerce single oestrus females. Previous work has revealed the importance of motor synchrony in dolphin alliance behaviour. Here, we demonstrate that allied dolphins also engage in acoustic coordination whereby males will actively match the tempo and, in some cases, synchronize the production of their threat vocalization when coercing females. This finding demonstrates that male dolphins are capable of acoustic coordination in a cooperative context and, moreover, suggests that both motor and acoustic coordination are features of coalitionary behaviour that are not limited to humans.

Watch this space for forthcoming updates on this remarkable dolphin population…