Highlights: We discovered that male dolphin alliance behaviour varies systematically along the Peron Peninsula in the World Heritage Listed Shark Bay, Western Australia. It is rare to find such variation in a single population of mammals, and indeed even more so in a single social network. This exciting discovery was made by pure serendipity, as often happens in science. We set out to work on a completely different issue, and discovered this!

Abstract: Within-species variation in social structure has attracted interest recently because of the potential to explore phenotypic plasticity and, specifically, how demographic and ecological variation influence social structure. Populations of bottlenose dolphins (Tursiops spp.) vary in male alliance formation, from no alliances to simple pairs to, in Shark Bay, Western Australia, the most complex nested alliances known outside of humans. Examination of ecological contributions to this variation is complicated by differences among populations in other potentially explanatory traits, such as phylogenetic distance, as well as female reproductive schedules, sexual size dimorphism, and body size. Here, we report our discovery of systematic spatial variation in alliance structure, seasonal movements and access to mates within a single continuous social network in the Shark Bay population. Participation in male trios (versus pairs), the sizes of seasonal range shifts and consortship rates all decrease from north to south along the 50 km length of the study area. The southern habitat, characterised by shallow banks and channels, may be marginal relative to the open northern habitat. The discovery of variation in alliance behaviour along a spatial axis within a single population is unprecedented and demonstrates that alliance complexity has an ecological component. 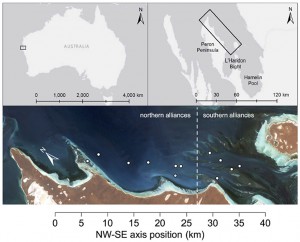 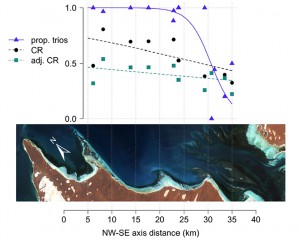 Acknowledgements: This study was supported by grants from the Australian Research Council (A19701144 and DP0346313), The Eppley Foundation for Research, The Seaworld Research and Rescue Foundation, The W. V. Scott Foundation, The National Geographical Society’s Committee for Research and Exploration and NSF (1316800). Accommodation was very generously provided by the Monkey Mia Dolphin Resort. Permits for the scientific use of animals were obtained from the West Australian Department of Parks and Wildlife. The University of Massachusetts at Dartmouth approved this study. Many generous people helped make this project possible. Landsat 7 ETM+ imagery of Shark Bay courtesy of the U.S. Geological Survey.