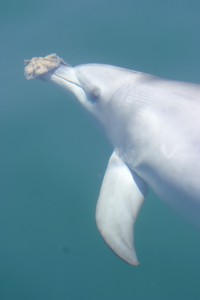 We are very pleased to announce the publication of “Cultural transmission of tool use by Indo-Pacific bottlenose dolphins (Tursiops sp.) provides access to a novel foraging niche” in Proceedings of the Royal Society B.

Abstract: Culturally transmitted tool use has important ecological and evolutionary consequences and has been proposed as a significant driver of human evolution. Such evidence is still scarce in other animals. In cetaceans, tool use has been inferred using indirect evidence in one population of Indo-Pacific bottlenose dolphins (Tursiops sp.), where particular dolphins (‘spongers’) use marine sponges during foraging. To date, evidence of whether this foraging tactic actually provides access to novel food items is lacking. We used fatty acid (FA) signature analysis to identify dietary differences between spongers and non-spongers, analysing data from 11 spongers and 27 non-spongers from two different study sites. Both univariate and multivariate analyses revealed significant differences in FA profiles between spongers and non-spongers between and within study sites. Moreover, FA profiles differed significantly between spongers and non-spongers foraging within the same deep channel habitat, whereas the profiles of non-spongers from deep channel and shallow habitats at this site could not be distinguished. Our results indicate that sponge use by bottlenose dolphins is linked to significant differences in diet. It appears that cultural transmission of tool use in dolphins, as in humans, allows the exploitation of an otherwise unused niche.